Re: the data & proof of placebo control studies during vaccine clinical trials

Facts of the Case

The Department of Health and Human Services (HHS) was sent a 19-page legal notice on October 12, 2017 by the Informed Consent Action Network (ICAN) requesting confirmation that certain obligations regarding vaccine safety required under the 1986 Act had been fulfilled or will be fulfilled. [1]

The notice asked (HHS) to “[p]lease explain how HHS justifies licensing any pediatric vaccine without first conducting a long-term clinical trial in which the rate of adverse reactions is compared between the subject group and a control group receiving an inert placebo?” [3]

ICAN sought copies of the reports HHS was required to submit to Congress every two years, starting in 1988, detailing improvements it made to vaccine safety. ICAN was represented by Robert F. Kennedy, Jr. [2]

ICAN was founded by Del Bigtree who hosts the weekly live online news program “The HighWire,” and is an Emmy-award winning producer of the CBS medical talk show “The Doctors.” He is producer of the groundbreaking documentary “Vaxxed: From Coverup to Catastrophe.” [2]

Congress therefore charged the Secretary of HHS with the explicit responsibility to assure vaccine safety. Biannual reports of HHS’s progress in improving vaccine safety were to be submitted to Congress. Yet, as ICAN has now proven, these reports were never created. [2]

The request included over 55 organizations whose members exceed five million Americans also voicing concern about vaccine safety. Freedom of Information Act (FOIA) documents show that the agency took the notice very seriously calling upon all internal departments and resources to craft their response. According to the FOIA documents, all HHS operating divisions, The National Vaccine Program Office, Assistant Secretary for Financial Resources, and The Office of the Assistant Secretary of Health all took part in the response. In Addition, FOIA email documents also state, “The National Vaccine Program Office staff has pulled together a draft response and is requesting that it be cleared with CDC, OGC, FDA, HRSA, NIH, and AHRQ for review prior to signature.”  [1]

Despite nine different government entities working on the response, their eventual January 18, 2018 reply was both lackluster and telling. Their brief 9-page response was unable to provide solid answers to the eleven questions asked of the agency concerning vaccine safety. The flimsily HHS reply triggered a deeply thorough 88-page response from ICAN laying out every detail concerning the problems and issues happening in regards to vaccine safety stemming from HHS. Its opening page writes: [1]

Among several concerning points, HHS choose to began their January reply by writing, “…many pediatric vaccines have been investigated in clinical trials that included a placebo.” [1]

As defined by the CDC, a “placebo” is: “A substance or treatment that has no effect on human beings.” [1]

HHS’s response also claimed that safety in these trials was reviewed for a significant duration, without specifying any duration. [3]

Later in their same letter, HHS states, “Vaccines are held to strict standards of safety.” [1]

Bigtree stated: “They’ve now printed it. So now you know for a fact that they just admitted those products you’re injecting into your kids have never been compared to a control. An inert saline injection.”​ [1]

Furthermore, according to HHS’s childhood vaccine schedule, babies receive 3 injections of each of the following vaccines between day one and 6 months of life all untested against a placebo control. [1] 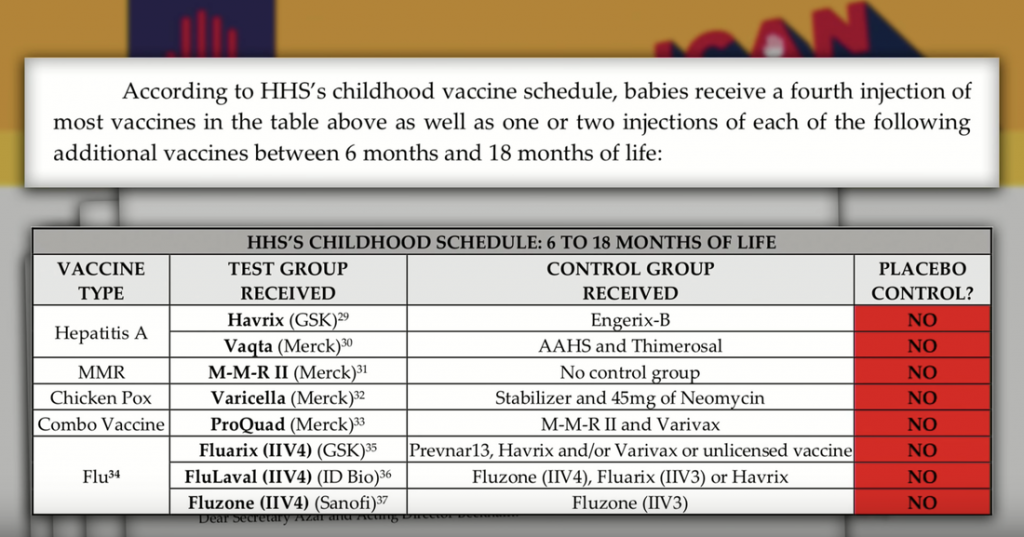 Even pro-vaccine luminaries like Dr. Stanley Plotkin, vaccine authority and author of Plotkin’s Vaccines, appears to be in agreement with ICAN. Emails from a recent FOIA request show Plotkin wrote in June 2018 correspondence, “One point I do agree with [Robert F] Kennedy [Jr] about: there should be more safety studies…”​ [1]

Vaccine manufacturers insist that their products are safe and effective, despite many in the public reporting otherwise (injuries). Control experiments are essential to understanding how a medical product performs. Until this FOIA request, there has not been a public disclosure of this information casting doubt as to the “Science” underpinning the safe and effective claim. This information could harm the faith in one or all vaccines, and could be potentially destructive to this industry.

“It is troubling that HHS chose to begin its response by misstating that prior to licensure for children “ many pediatric vaccines have been investigated in clinical trials that included a placebo.” At worst, HHS knowingly perpetuated this inaccurate claim but at best, HHS was unaware this claim was incorrect. This leaves the public to wonder what other critical assumptions underpinning HHS’s confidence in vaccine safety are incorrect.” [1]

ICAN’s original HHS notice directly pointed to concerns about the two Hepatitis B vaccines licensed for injection into one-day-old babies. Namely that the vaccines, according to the FDA’s own vaccine insert included in the original HHS notice, show that not only were the shots not tested against inert placebos, both vaccines were licensed after trials that solicited adverse reactions for only four days [Merck] and five days [GlaxoSmithKline] respectively after vaccination. To this point, HHS responded by referring back to the same inserts which contained the concerning data by simply writing, “Data relied upon in licensing infant use of hepatitis B vaccines is summarized in the respective package inserts.” [1]

ICAN’s response included a detailed chart containing every pediatric vaccine, citing to FDA documents, which indisputably proves that it was categorically false for HHS and the FDA to claim that “many pediatric vaccines have been investigated in clinical trials that included a placebo.” [3]

Perhaps one of the most damning findings referred to in ICAN’s 88-page HHS letter was titled HHS’s “Safety” Pyramid Scheme. Since inert placebo controls are not required and rarely used in vaccine safety testing, other vaccines take that role in what are referred to as “active controls.”  ICAN’s 88-page response to HHS points out to the agency the following: [1]

“HHS’s own industry guidance for drug testing explains that an active control is only appropriate if it is a “drug whose effect is well-defined,” which means “historical placebo-controlled trials are available to define the active control effect.” Despite its own policy and guidance, HHS does not require this minimal assurance for vaccines.” [1]

The US Department of Health and Human Services (HHS) settled a court-ordered stipulation  admitting that they could not produce 30 years of required evidence showing they have made improvements in the manufacturing, testing, warning, field surveillance, adverse reaction reporting and research on vaccines in order to reduce the risk of adverse reactions as mandated by the 1986 National Childhood Vaccine Injury Act (1986 Act). [1]

LOS ANGELES, Sept. 14, 2018 /PRNewswire/ — The U.S. Department of Health and Human Services (HHS) has admitted that, in direct violation of Federal law, it failed to provide a single vaccine safety report to Congress for thirty years, according to Informed Consent Action Network (ICAN).

HHS conceded that those reports do not exist and the Court entered an order confirming this concession. [2]

“It is apparent that HHS doesn’t have a clue as to the actual safety profile of the now 39 doses, and growing, of vaccines given by one year of age, including in utero,” said Bigtree. “In 1986, a one-year old child received eleven doses. [2]

The reality is that none – save one – of the pediatric vaccines was licensed based on a placebo controlled clinical trial! … No proof has ever been provided. [3]

Nine days after ICAN filed its petition, on June 30, 2020, the FDA changed course and issued emergency guidance to industry that all COVID-19 clinical trials must use a placebo control.

Pandemic of the VACCINATED—75 Athletes Collapse from Heart Failure